The following was aired on WXYZ and posted to their website on July 15, 2016. 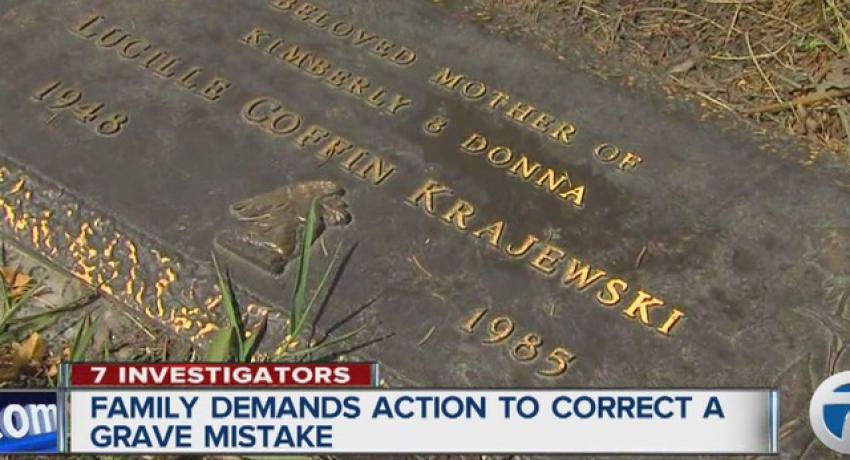 She was a mother and a loving wife. 31 years ago, Mark Grabow lost his mother-in-law Lucille. Over the years, her family would visit her gravesite to pay their respects, until two years ago.

That's when Mark found out that the plot where Lucille was supposedly buried is apparently occupied by someone who isn't Lucille.

The family didn't realize it until Lucille's husband, Marvin, died two years ago. The two were supposed to be buried together, but the family is holding Marvin's remains until they figure out where Lucille is.

According to court documents, the state took over Cadillac Memorial Gardens in Clinton Township after allegations of mishandling of funds and misappropriations of many bodies.

The attorney for the new company sent 7 Action News this statement:

The cemetery offered to have the grave site where Mrs. Krajewski is buried opened at no cost to the family so an identification could be done, however the family refused…

Cadillac Memorial Gardens East is confident on the location of Mrs. Krajewski’s grave site. The cemetery is also confident that the courts will handle this matter with utmost respect and consideration for the family and their concerns.

The attorney also said Lucille's gravesite has never been moved, just mis-marked, and they are confident where she is buried.

Mark says the family will agree to open the grave if it is done by a third party. He said they also need to be compensated for 30 years of going to the wrong gravesite and in the end, asking, "Where's mama?"

Remote, socially distanced justice: Potential backlogs concern some
One of Michigan's First Court Cases Since Shut Down Starts, but With a Twist
Aaron Silvenis, Esq. On Why TrialPad Is the Right Tool for High Stakes, High Pressure Litigation
Getting to Know: Joshua A. Lerner
Oakland jury awards $65K for head injury
From Television to Trial Court
Former Hyatt Regency in Deaborn spared closure
COPYRIGHT © 2022 COHEN | LERNER | RABINOVITZ. ALL RIGHTS RESERVED. | Disclaimer | LOG IN