The following article was written by Sheila Pursglove and published at LegalNews.com on January 27, 2015. 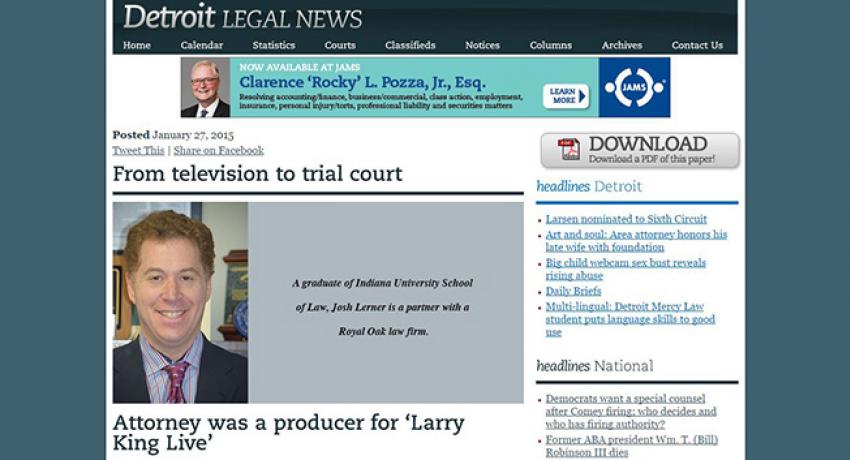 Attorney Josh Lerner spent several years in the TV field before entering law, as a producer on “PM Magazine,” associate producer for WOR-TV in New York, producer in the News Department at WDIV-TV in Detroit, and executive news producer at WANE-TV in Fort Wayne.

“I always enjoyed the creative process of television – I enjoyed telling stories and making complicated things simple,” says Lerner, now a trial attorney and a partner at Cohen, Lerner & Rabinovitz, P.C., in Royal Oak. “I enjoyed the news business because it was fast-paced and new every day. Also, you had a sense of accomplishment – when a show was produced, it went on the air. Good or bad, when it was over, that was it and you move on to the next day. You also get the sense that with television news, you’re in the middle of the action observing and reporting what was happening.”

Lerner also worked as an associate producer on “Larry King Live,” where he enjoyed meeting King and his celebrity guests.

“Larry King is a great guy and loved baseball,” Lerner says. “He liked to tell stories of what his life was like growing up in Brooklyn and to mentor people coming up in the business. Meeting Bob Hope and Frank Sinatra was particularly interesting given their histories in the business. They were both very nice, but both were strictly business. At that time, people took a risk coming onto CNN given how new cable television was – they were friends with Larry King and wanted to help him out.”

Producing a news program has many similarities to producing a trial, Lerner notes. “They both require a lot of time and organization, but ultimately, you’re making a presentation to people.
However, in Court, you can actually see the reactions of people, on television you have to guess as to how what you are doing is being received. The key in both jobs is making complicated things simple. I enjoy being in front of a jury and helping to explain my client’s case to them and why our position is the right one.”

And with over 40 civil actions to his name, Lerner – who specializes in business, commercial, construction, and personal injury litigation – is excellent at outlining his cases.

In one challenging case, he represented a young woman who fell from a chair lift at Boyne Mountain ski resort. “We alleged the chairlift was unattended – she dangled from upwards of 20 feet screaming for the lift attendant to stop the lift, but he never did,” Lerner explains. “When she couldn’t hold on anymore, she fell to the ground and ended up being a paraplegic. I enjoyed representing someone who was aggrieved who would not have received any justice without my help.”

In another wintry case, Lerner represented a woman who fell on an icy sidewalk in Flint. “When the Court dismissed the case on summary disposition, we appealed all the way to the Michigan Supreme Court where we won,” he says. “Arguing in front of the court was a great thrill.”

Lerner represented the Village of Franklin Historic Commission in a challenge to the Village council regarding the construction of the police department and whether it fit in with the historic nature of the Village. “While we ultimately were not successful in the Court of appeals, I enjoyed being an advocate for a group of residents who felt passionately about their hometown,” he says.

Lerner and his colleagues represented the owners of the Hyatt in Dearborn who had hired a management company to run the hotel while they conducted their due diligence into a purchase. “They never had the money to purchase the hotel, but it took us two years to get them out of the managers,” Lerner says. “The whole process took extensive motion practice, a massive document production and ultimately a 24-hour mediation that resulted in a settlement that was signed at 6 a.m.”

Lerner showed his promise as a future trial lawyer at Indiana University School of Law, where he was among the Order of the Barrister, a member of the Indiana International & Comparative Law Review, and took First Place in the Moot Court Competition. And during a year as a visiting student at Wayne State University Law School he won an American Jurisprudence Award for Trial Advocacy.

“I was passionate about television and the law, but I always figured it was easier for a news producer to become an attorney, than for an attorney to become a news producer,” he says. “I found the law interesting and enjoyed solving problems and helping people navigate the system. I was surprised, as with television, you try and make complicated things simple. I saw how attorneys can affect society and the respect our profession was given by people with whom we worked.”

After clerking for Maurer, Rifkin & Hill, and for Garan, Lucow, Miller, Seward & Becker, Lerner was an associate attorney at Blum, Konheim & Elkin, and then at Cohen & Ellias, P.C., before joining his current firm. “My partner of 16 years, Steve Z. Cohen, has helped guide me through my areas of practice,” he says. I find the areas of law ever changing, interesting and certainly challenging – it’s fascinating to see how things really work.”

Lerner holds an undergrad degree in history and political science from the University of Wisconsin. “I’m someone who has always been interested in the world, why things happen and making sure we do not repeat the mistakes of the past,” he says. “As to politics, once I realized how much influence politicians have over our lives in a society based on the rule of law, I discovered how important it is to be aware and involved in the politics.”

The Southfield native, who now calls Huntington Woods home, still counts history among his interests, as well as running, biking, and family – which includes his wife and three kids, ages 7, 10, and 14. A Lifetime Fellow of the Oakland County Bar Foundation, Lerner is a former President and 20-year board member Hillel of Metro Detroit (Wayne State), a Bar lecturer for the Wolverine and Stryker Bar Associations, and a former Chair of the State Bar of Michigan Young Lawyers Section and Board of Commissioners.

Lerner has lived and worked in the City of Detroit for most of his life. “I’ve seen it come a long way – even in the last five years, you can see a difference,” he says. “It’s nice to be a part, albeit a small one, of what is going on. However, my hope is that by the time my youngest graduates college in 2029, that the Metro Detroit area will be just the type of place where she wants to return to and begin her life as an adult.”