The following article appeared on the Traverse City Record Eagle on March 14, 2021. You can view the original article here. 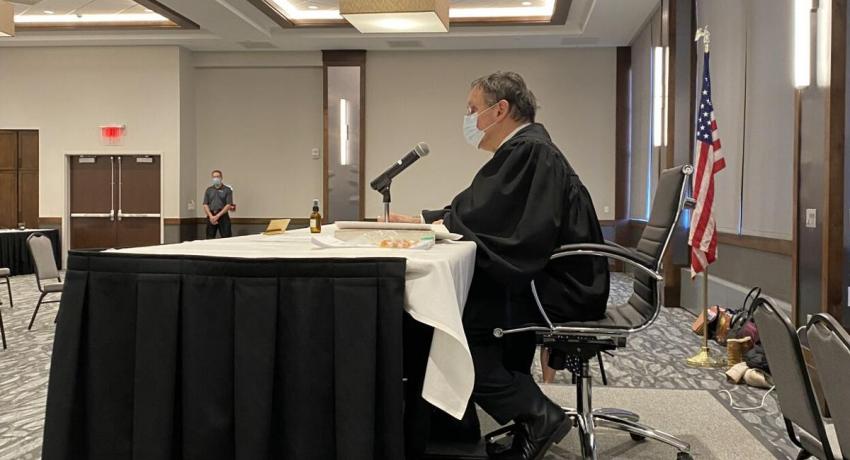 TRAVERSE CITY — In the spring of 2019, three people in two vehicles were involved in a car crash in Grand Traverse County.

By the end of the day on July 26, 2019, Timmie D. Collins had sued Vincent and Michael Nizzi, as well as Auto Owners Insurance Co., in 13th Circuit Court.

All the parties in the civil case retained council, motions were filed, subpoenas served, depositions taken and documents produced.

An April 2020 settlement conference was rescheduled for May, and then moved to June.

The state’s Supreme Court on April 23, 2020, issued an administrative order putting the kibosh on jury trials in Michigan through June 22, 2020. Most states followed a similar protocol, records show.

When that first state order expired, Michigan’s Supreme Court Administrators Office issued another one: jury trials could be held, but only with SCAO’s permission, which required courts submit an approved plan, including room layouts and courtroom infection control policies.

“It is really up to the judge whether to submit a plan,” said Grand Traverse County Prosecutor Noelle Moeggenberg. “And in the 13th Circuit, that plan was approved.”

And, the automobile crash case proceeded to trial in front of Judge Thomas G. Power.

He said the case started out as a relatively standard insurance-related civil suit, the like of which he’d seen many times before, since first being elected to the bench in 1992.

“This was the first jury trial held in person in the state after the pandemic was declared,” Power said. “It may have been the first in the nation. If it wasn’t the first, it was pretty close to it.”

Rising virus case numbers forced another hiatus in November, December and January, Power said, then another return to in-person litigating earlier this month.

It isn’t just civil cases, but criminal jury trials were also held in person inside the three-story brick building that’s home to the 13th Circuit Court.

Staff and judges say they have gotten creative in an effort to follow mask and social distancing mandates.

Over the summer, jury selection was held in Central High School’s auditorium, for example. And when students went back to in-person school, the process moved to Old Town Playhouse and a conference room at the Park Place Hotel.

Everyone in the courtroom is masked except testifying witnesses, some jurors sit in the jury box and the rest are spread out around the courtroom. Anyone who wants to watch the trial can do so on the presiding’s judge’s Youtube channel, where proceedings are streamed live.

Moeggenberg said she has now prosecuted several cases this way, and while she feels safe doing it, she acknowledged she’s made strategic adjustments.

“Trying to read juries, its hard if you can’t see someone’s face,” she said. “And, I have to think about where to stand, who to face. I can’t really use a projector, because of the way people are spread out, they couldn’t all see it.”

Power estimated there are a handful of jury trials waiting to be rescheduled, but no backlog.

Around the corner, that’s hardly the case inside the Robert P. Griffin Hall of Justice. Where as many as 200 jury trials are on hold, Moeggenberg said.

Even knowing that number, not everyone said they are supportive of holding in-person trials during what could be the tail end of the worst of the pandemic.

“I don’t understand the rush, when we could all be in a much better place in a month or two,” said attorney Craig Elhart. “I haven’t tried a case in person since February of 2020.”

Elhart said he has heard from clients who say they are anxious for their cases to be adjudicated, and Elhart said he’s looking forward to being back in the courtroom — but not if it means risking exposure to the virus.

“I’ve got a murder trial in Benzie, and my client has been incarcerated for most of the last year, so I get it,” Elhart said.

Elhart said he thought this was the prudent way to go, especially for criminal trials.

“Civil cases are set up for a smaller jury, just five or six,” Elhart added. “With a criminal trial you might have 14 or 15. Why take the risk when this could be over by the end of May, is my point.”

One reason, judges and attorneys say, may be to keep the court docket from becoming backlogged.

Once more people are vaccinated and courts resume in-person trials as a matter of course, Power said the 13th Circuit Court likely won’t have a deluge of cases to try to re-schedule.

At least one defense attorney who works regularly in 86th District Court says she feels the backlog, and expressed concern for her clients.

“I have a dozen waiting to go to trial,” said attorney Cinder Conlon, who frequently accepts court-appointments from the Michigan Indigent Defense Council. “Illegal entry, a trespass case, a false reporting of a misdemeanor and a couple of domestic violence cases.”

Conlon said most defendants in misdemeanor cases like these receive PR bonds — personal recognizance —which means no money out of pocket for those who adhere to their bond conditions.

But the cost of court-ordered testing, which many defendants are required to pay — can add up fast while defendants wait for trial, she said.

A PBT — preliminary breath test — at New Direction Testing on Racquet Club Drive are $3 each or $15 a week for daily testing and urine screens are $20, their website shows.

“It’s like they’re on probation, but they’re not,” Conlon said, of her clients out on bond. “They have to pay these fees longer and longer, but they haven’t been found guilty of anything.”

Conlon and Paul Jarboe, coordinator for Grand Traverse County’s MIDC, said they were initially hopeful for more advantageous plea offers from the prosecutor’s office, though those have not always materialized, they said.

Moeggenberg said since the pandemic, she’s felt pressure from defense attorneys, defendants and sometimes even from crime victims, to settle cases she might otherwise take to trial.

“There have been some I’ve settled or dismissed in ways that I wouldn’t in non-pandemic times, for example a suspended license or a disturbing the peace where someone has been out on bond and has not re-offended,” she said. “There are others that I’m going to hold the line.”

In December, Moeggenberg’s office had a backlog of 180 cases; by last week that number climbed closer to 200, she said.

“Most of those incarcerated here are felons — a lot of the misdemeanors are bonded out,” Barsheff said.

In district and circuit courts, preliminary exams, sentence hearings, probation violation hearings and assorted other court actions continue to be scheduled and are conducted remotely on Youtube.

In the mean time, 86th District Court Administrator Carole Stocking said that court’s judges and staff continue to weigh the increasing case backlog against the risk of jurors, court staff, attorneys or defendants being exposed to the virus.

“We are being very, very cautious,” Stocking said, of the hiatus for in-person jury trials. “The numbers are going back up, spring break is coming and we may hold off a little longer. We just don’t want anyone to get sick on our watch.”

Stocking said she’d had previous discussions with staff at the Grand Traverse County Health Department, and would be reaching out to them again next week for virus transmission risk updates.

One of Michigan's First Court Cases Since Shut Down Starts, but With a Twist
Aaron Silvenis, Esq. On Why TrialPad Is the Right Tool for High Stakes, High Pressure Litigation
Getting to Know: Joshua A. Lerner
Family demands action to correct grave mistake
Oakland jury awards $65K for head injury
From Television to Trial Court
Former Hyatt Regency in Deaborn spared closure
COPYRIGHT © 2023 COHEN | LERNER | RABINOVITZ. ALL RIGHTS RESERVED. | Disclaimer | LOG IN