The following article was published in Michigan Lawyers Weekly on September 22, 2014. 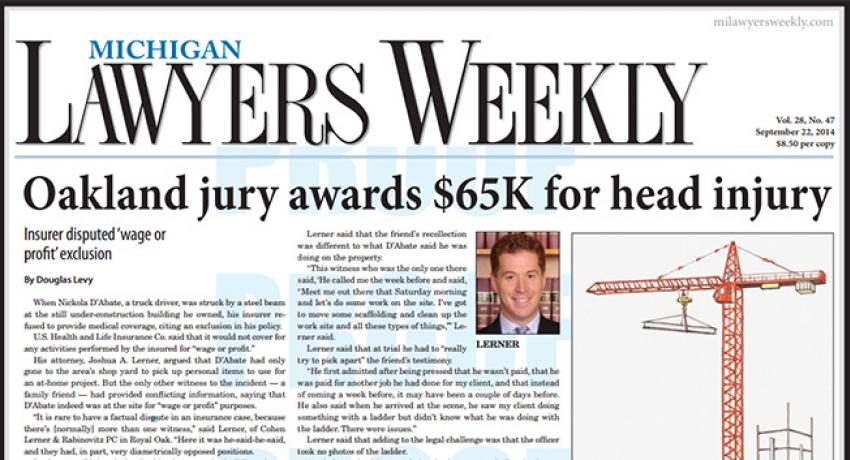 When Nickola D’Abate, a truck driver, was struck by a steel beam at the still under-construction building he owned, his insurer refused to provide medical coverage, citing an exclusion in his policy.

U.S. Health and Life Insurance Co. said that it would not cover for any activities performed by the insured for “wage or profit.”

His attorney, Joshua A. Lerner, argued that D’Abate had only gone to the area’s shop yard to pick up personal items to use for an at-home project. But the only other witness to the incident — a family friend — had provided conflicting information, saying that D’Abate indeed was at the site for “wage or profit” purposes.

“It is rare to have a factual dispute in an insurance case, because there’s [normally] more than one witness,” said Lerner, of Cohen Lerner & Rabinovitz PC in Royal Oak. “Here it was he-said-he-said, and they had, in part, very diametrically opposed positions.

In the case, D’Abate’s family friend was at the building site to help D’Abate retrieve a ladder, which was atop scaffolding. D’Abate affixed the ladder to the crane, which the friend operated, but when the scaffolding gave way, a beam struck D’Abate in the head.

The friend called the police. As D’Abate made his way to hospital, the arriving officer took extensive photos of the area as a potential crime scene should D’Abate die from his injuries.

Lerner said that the friend gave a detailed report to the police and the EMS company, and that information got passed on to the hospital and became part of the medical record.

Lerner added that the insurer’s decision to deny the claim was based basically on the medical record, “which they didn’t know at the time was based on [the friend’s] statements to the EMS people, who passed it on the ER people as a work-related incident. They really made the decision 12 days after the incident occurred and they just stuck to their guns.

“They didn’t have the testimony of this witness, they didn’t have any of the photos taken by the police officer, so if anything, the information we discovered during the course of the litigation just emboldened their position: ‘Here’s why we denied it, but all these other reasons [show] this guy was working.’”

Lerner said that the friend’s recollection was different to what D’Abate said he was doing on the property.

“This witness who was the only one there said, ‘He called me the week before and said, “Meet me out there that Saturday morning and let’s do some work on the site. I’ve got to move some scaffolding and clean up the work site and all these types of things,”’ Lerner said.

Lerner said that at trial he had to “really try to pick apart” the friend’s testimony.

“He first admitted after being pressed that he wasn’t paid, that he was paid for another job he had done for my client, and that instead of coming a week before, it may have been a couple of days before. He also said when he arrived at the scene, he saw my client doing something with a ladder but didn’t know what he was doing with the ladder. There were issues.”

Lerner said that adding to the legal challenge was that the officer took no photos of the ladder.

“And that raised issues, obviously, from me and also the insurance company, but I believed my guy and he seemed to have an answer for everything. His own description was he was up there trying to hook the ladder, the beam fell on his head and he wasn’t wearing a hard hat, and then he said, ‘Lights out.’ He didn’t remember anything after that.”

Lerner said that ultimately he chose to hammer the issue of the policy language itself to the jury.

“Even if you believe the position being taken by the insurance company, which we disagree with, what they say happened still doesn’t fit under the policy language,” he said.

“The language said they will not pay for any injury that occurs in the scope of employment or if you’re doing something for ‘wage or profit.’ My point was, obviously he wasn’t getting a wage because he owned the building, it was on a Saturday, and no one else was there, and that’s not how he makes his living.

“I made it point of arguing … ‘Do you think he profited by what he was doing that day? Because if you don’t think he was profiting at all, then he was not excluded under this policy and he should have his medical bills paid. He did everything right and he shouldn’t have to incur this loss because [the carrier’s] fighting to not pay the bill.’”

After three days of trial, an Oakland County answered “no” to the sole verdict form question: “Does Exclusion #39 in Plaintiff’s insurance contract with Defendant apply to the facts in this case?”

D’Abate was then awarded the agreed-upon damages amount of $64,922.77 for his medical expenses. The case resolved thereafter for $115,000.

Christopher L. Terry, the Detroit-based attorney who represented the defendant, did not return a call seeking comment.

Lerner said he advises other attorneys who have a similar claim to work hard in the discovery phase to find the real reason for the carrier to deny the claim.

“Take depositions of the people who make those decisions and determine whether you think they had all the facts when they were making those decisions, and whether they were giving your client, the insured, a fair shot,” he said.

“If they didn’t, then you have an advantage, because juries inherently are looking to help people they feel have been wronged.”

Remote, socially distanced justice: Potential backlogs concern some
One of Michigan's First Court Cases Since Shut Down Starts, but With a Twist
Aaron Silvenis, Esq. On Why TrialPad Is the Right Tool for High Stakes, High Pressure Litigation
Getting to Know: Joshua A. Lerner
Family demands action to correct grave mistake
From Television to Trial Court
Former Hyatt Regency in Deaborn spared closure
COPYRIGHT © 2023 COHEN | LERNER | RABINOVITZ. ALL RIGHTS RESERVED. | Disclaimer | LOG IN